At the Siminoff Temple, History Lives On

For more than a century, the Siminoff Temple at the Masonic Homes of California has been one of the state's most important lodges.

Even for a family whose connection with Masonry goes back generations, one day stands out in the Adamsons’ long tenure. It was early 2008, and Larry Adamson was several months into his term as grand master of California. Together with his brother Richard, he’d traveled to the Masonic Homes campus in Union City, where their father, Doc, lived with their mother. That day, Larry Adamson would lead the installation of their dad as the new master of Siminoff Daylight Lodge № 850, inside the Siminoff Temple, surrounded by family and hundreds of their closest friends, neighbors, and Masonic brothers.

“My father wasn’t a real talkative guy, but that day he looked at me and said, ‘Thank you for doing this,’” Larry Adamson recalls. “That was a special moment for me, and probably the most sincere moment I ever had with him.”

It wasn’t just the familial nature of the moment that made it special, Adamson says. It was also the setting: the Siminoff Temple. Before they passed away, Adamson’s parents lived at the Masonic Homes for nearly a dozen years. As a result, the Homes remain deeply important to the family—so much so that Adamson later became chairman of its board of directors, partly out of gratitude for his parents’ treatment there. There, in the Masonic Homes’ lodge room, which in its various iterations has hosted special Masonic events for more than 100 years, the family was able to celebrate not just a father and his sons, but multiple generations spent in Freemasonry.

The Siminoff Temple: A Historic Home

Bathed in the colored light of its stained-glass windows and surrounded by Masonic antiques and relics going back to the earliest days of the fraternity, the Siminoff lodge room in Union City is one of the most important places in California Masonry—and one where that feeling of tradition is palpable.

The history of the lodge room in Union City goes back almost to the founding of the campus itself.

Just four years after the first residents were admitted to the Masonic Widows and Orphans Home in Decoto, as it was originally called (using the earlier name for Union City), a wealthy Bay Area Freemason named Morris Siminoff presented a gift of $30,000—more than $1 million in today’s dollars—to erect a Masonic temple on its grounds. Siminoff, a Russian immigrant who’d become a successful textile manufacturer in the Bay Area, was a member of Fidelity № 120 in San Francisco (now named San Francisco № 120) as well as belonging to each of the chapters of the Scottish Rite. Not much else is known about Siminoff, although at one point he is recorded as having donated a shipment of coats and cloaks for the young orphans who originally lived at the Decoto Home. Tragically, he died suddenly in 1907, at the age of 44, likely a result of injuries suffered falling off a horse during a parade of the Knights Templar in San Francisco.

Siminoff’s gift, made alongside his wife, Emma, paid for the construction of a “splendid temple” (as it was described by grand master at the time) of brick and stone. The temple contained the lodge room, an assembly hall, and 16 new rooms for elderly residents. The addition of those rooms allowed the home to convert a former dormitory into its first widows’ quarters. (At the time, women and men were housed separately.) The donation also funded the installation of a 350-pipe, electric-powered organ.

The cornerstone for Siminoff Temple was laid on April 22, 1903; six months later, the building was formally dedicated by Grand Master Orrin S. Henderson. More than 3,000 Masons made the trip to the East Bay hills to witness the event. On November 14, Eucalyptus № 243 of Hayward conferred the first Masonic degree inside the temple; in subsequent months, Sequoia № 349  of Oakland and Alameda № 167 of Centerville (now part of Fremont) would use it for third-degree conferrals.

Yet for more than 100 years, no lodge permanently called the temple home. That wasn’t the original plan: In the Proceedings of the Grand Lodge in 1903, Grand Master Henderson “endorsed and advocated for the many advantages, too numerous to mention, that are to be derived” by forming a lodge at the home. He even went so far as to suggest a name: Preston Lodge, in honor of Past Grand Master Edwin Preston (1895), who had died earlier that year.

It’s unclear why that lodge never came into being, but for more than a century, Siminoff Temple remained a sort of Masonic home away from home, with nearby lodges using it to host special events or degree conferrals, but no group meeting regularly there. By 1976, the temple had fallen into disrepair and was shuttered by state officials for failing to meet earthquake-safety standards.

Above:
Fifty-six panels of brightly colored stained glass wrap around the Siminoff Center at the Masonic Homes in Union City.

A New Lodge is Born

For the next decade, the campus was without a Masonic lodge entirely, culminating in the demolition of the original temple in 1986. That same year, though, an ambitious new construction plan for the Masonic Homes brought the old temple back to life—sort of. As part of a $16 million development that included the construction of the 120-bed skilled-nursing facility named for benefactor Hugo Lorber, plans included building a new Masonic lodge room, to be housed alongside the campus chapel. Ground was broken on the project in 1987, and the new Siminoff Center, comprising the lodge room, foyer, and chapel, was dedicated by grand lodge officers on May 7, 1989.

The new facility was built from scratch, but designers went to lengths to include elements of the original Siminoff Temple in its design. Bricks from the 1903 temple were salvaged to construct the face of the new building, while the original altar was repurposed and reconditioned. Even the elaborate gas-powered chandelier that had once hung in the temple’s entryway was refurbished and made electric. It now hangs above the lodge room.

However, the design flourish that commands the most attention is the expansive set of stained-glass windows. Each of the 56 panels, measuring 4 by 4.5 feet, was fabricated by Judson Studios, the oldest family-run stained-glass maker in the country, and depict Masonic symbols including the square, plumb, and anchor. In addition to being so near the Masonic Homes’ chapel room, the colored windows lend the lodge room a special feeling of reverence.

Despite having a brand-new space available, it wasn’t until 2006 that the first seeds of a permanent lodge finally began to flower. That year, a degree team comprised of Masonic Homes residents began meeting and practicing on campus. The team per- formed for several lodges in the Bay Area, “contributing where we could and sharing our expertise,” according to Bobby Joe McCain, one of the original members of the group.

Recognizing an opportunity to make real a dream that at that point had been 103 years in the making, the Grand Lodge in 2006 issued a dispensation to Siminoff Daylight U.D., and on October 6, 2007, the lodge received its formal charter—the day before ground was broken at the neighboring Acacia Creek Retirement Community.

In the 15 years since, the lodge has grown from an initial group of 67 to a lodge of 105 members today, including master Joseph Pritchard, who is also the chief operating officer of the Masonic Homes. The lodge isn’t just for residents, either: Just over 40 percent of the members now live off campus. And another dozen members are residents of Acacia Creek who had not previously been Masons—meaning the lodge has more than a few 50-year veterans, as well as several newbies. For many of those members, it’s the lodge building itself that inspired their initial curiosity about Freemasonry. Says McCain, “I think we have a very impressive-looking lodge room. It’s quite a draw.”

McCain points for emphasis to the pair of hand- painted murals by John Dahle Jr., a member of the lodge and Masonic Homes resident who has worked for years as a commercial artist. The murals on the north and south walls depict scenes from the build- ing of King Solomon’s temple and feature old west typography, echoing the large mural he painted several years ago in his home lodge, Nevada № 13. “They’re gorgeous,” McCain says of the twin artworks. “They both incorporate a lot of the teachings of Freemasonry. They’re more than just a piece of artwork in the building.”

To Adamson, who as a member of the Masonic Homes board visits the Siminoff lodge often, the space still holds a special place in his heart. “It’s a beautiful complex,” he says. “But it’s not just that. It’s really an experience. It’s an experience to go and see the history that’s there.”

For support and information about the Masonic Homes of California or Masonic Outreach Services,
call (888) 466-3642.

Above:
Exterior view of the original, circa-1903 Siminoff Temple in Union City. The temple was shuttered in 1976 and rebuilt elsewhere on the campus as the Siminoff Center in 1989.

ARCHIVAL IMAGE:
Courtesy of the Henry Wilson Coil Museum and Library of Freemasonry 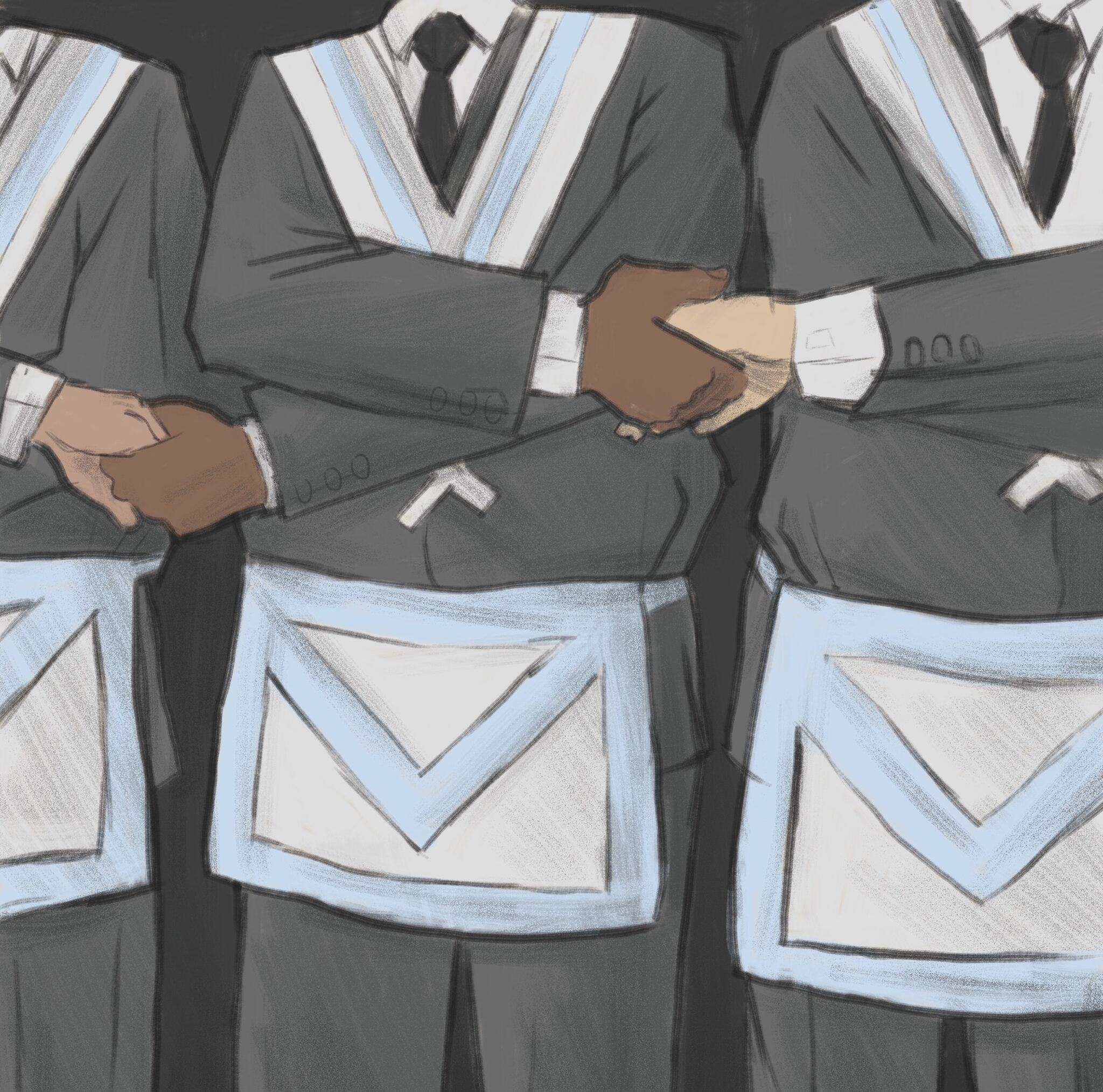 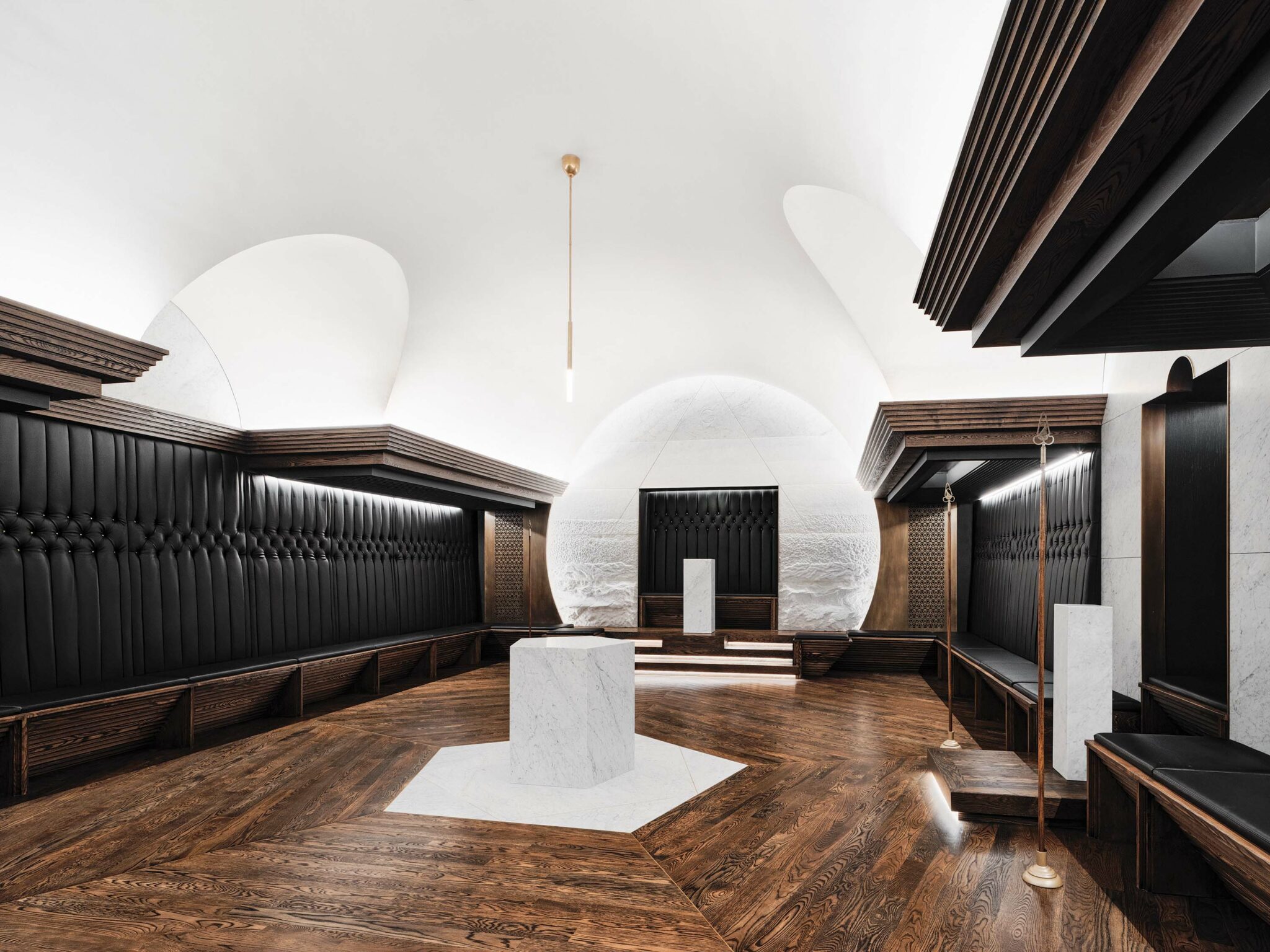