During the Sacramento cholera outbreak of 1850, Masons took the reins of a public health emergency.

For Californians, the weeks following the March 19 shelter-in-place order have felt not only incredible, but historic. Within the fraternity, there’s been a resounding call to arms for members to live up to their Masonic obligation by reaching out to the vulnerable among us to provide whatever relief they can.

As unprecedented as the moment has felt, the history of Masonry in California recounts an alarmingly similar circumstance, more than a century and a half earlier, in which Masons responded to a public health emergency. That was during the great cholera outbreak of 1850 in Sacramento and San Francisco, one of the most rapid, deadly, and grisly contagions ever—a horrific episode in state history, but one in which California’s early Masons left an indelible mark through their commitment to relief. Nearly 50 years later, their spirit would lead to the construction of the first Masonic Widows and Orphans Home, in Union City, later to become the Masonic Homes of California. 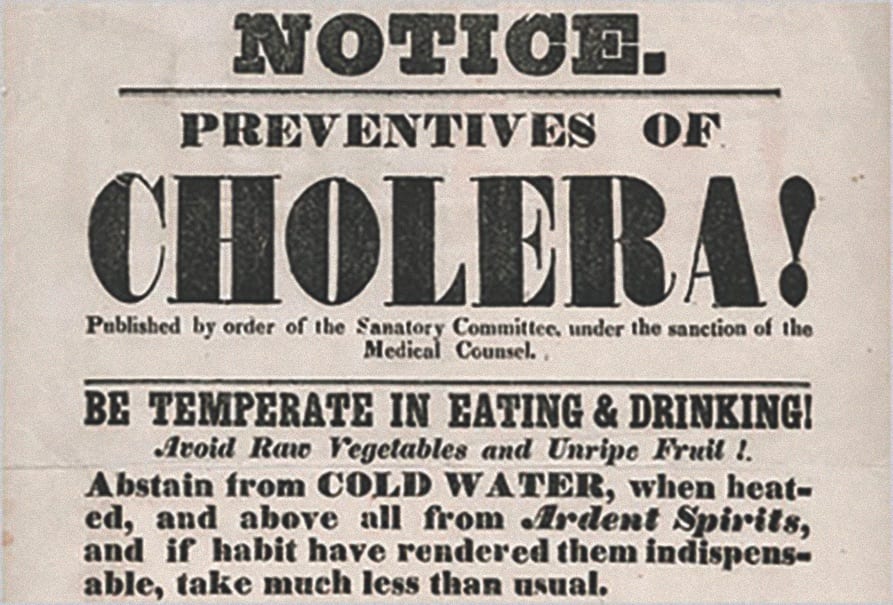 In the fall of 1850, however, such institutional supports were few and far between. It was October of that year that the first traces of what would be known as the Asiatic cholera were first spotted in patients along the waterfront of San Francisco, no doubt brought to the state by ship, among the 40,000 would-be gold miners flooding the city each year. On October 11, 1850, the first reports of cholera-related deaths were made in San Francisco. By October 14, just three days later, it was spotted in Sacramento. It would have been hard to miss: Cholera is among the most miserable diseases on earth, with symptoms including diarrhea, vomiting, and dehydration. Most cases ended in death within 36 hours.

Like a match to kindling, the disease erupted in Sacramento, a town still reeling from a catastrophic flood earlier that year, a fire, and a violent squatters’ riot. According to Prof. Mitchel Roth, writing in the Pacific Historical Review in 1997, within a week of the outbreak, 29 people were reported dead from the plague. The city council, acting with surprising if misguided force, ordered the mandatory burning of all garbage (under penalty of a crippling $500 fine for any resident or business out of compliance), hoping to eradicate the squalid grime believed to carry the disease. (The order backfired, leading only to an even greater tainting of the water supply.) Citizens were then ordered off the streets and into virtual quarantine. The actions did little to stop the spread of the disease, however. The following week, another 44 were reported dead, with the true number almost certainly higher, as many others had exhibited symptoms like dysentery before death, likely as a result of unconfirmed cholera.

Almost overnight, Sacramento’s cemeteries “appeared to be newly ploughed fields,” wrote a local businessman in his memoir, Life Sketch of Pierre Barlow Cornwall. Business ground to a halt and the city’s streets were deserted. From October 27 to 31, some 249 died of cholera, including 58 on Halloween Day. Reports of cholera death didn’t slow until the third week of November—five weeks after the first case—and not because of medical intervention. Rather, it’s been said, the disease slowed for the simple fact that there were so few people left to contract it. Among a city of 8,000, half of the town either died or fled. Later reports, accounting for all funeral and death records, estimate that between 800 and 1,000 people died in Sacramento of cholera in the space of about five weeks. Essentially, 17 percent of the city died in just over a month.

San Francisco, mostly on account of its more transient population, was spared from the brunt of the outbreak. Still, estimates peg its death toll at between 250 and 600, in a town of 10,000 (5 percent). San Jose lost 10 percent of its population to the pestilence over the same time span.

Remarkably, the cholera outbreak ultimately served as little more than a speed bump in the histories of the Bay Area and Sacramento. By late December of 1850, both regions were mostly back to normal, with business picking back up and the hunt for gold proving as alluring as ever. Rather, the true legacy of the outbreak is that it served as a catalyst for the formation of a more robust system of public health in California—an effort that Masons helped lead.

Prior to the fall of 1850, medicine was practiced more or less ad-hoc in California. San Francisco had just one public hospital. Sacramento had two. Physicians largely treated customers privately, in their own homes, or not at all. (The Gold Rush coincided with a period of broad skepticism of the medical profession.) 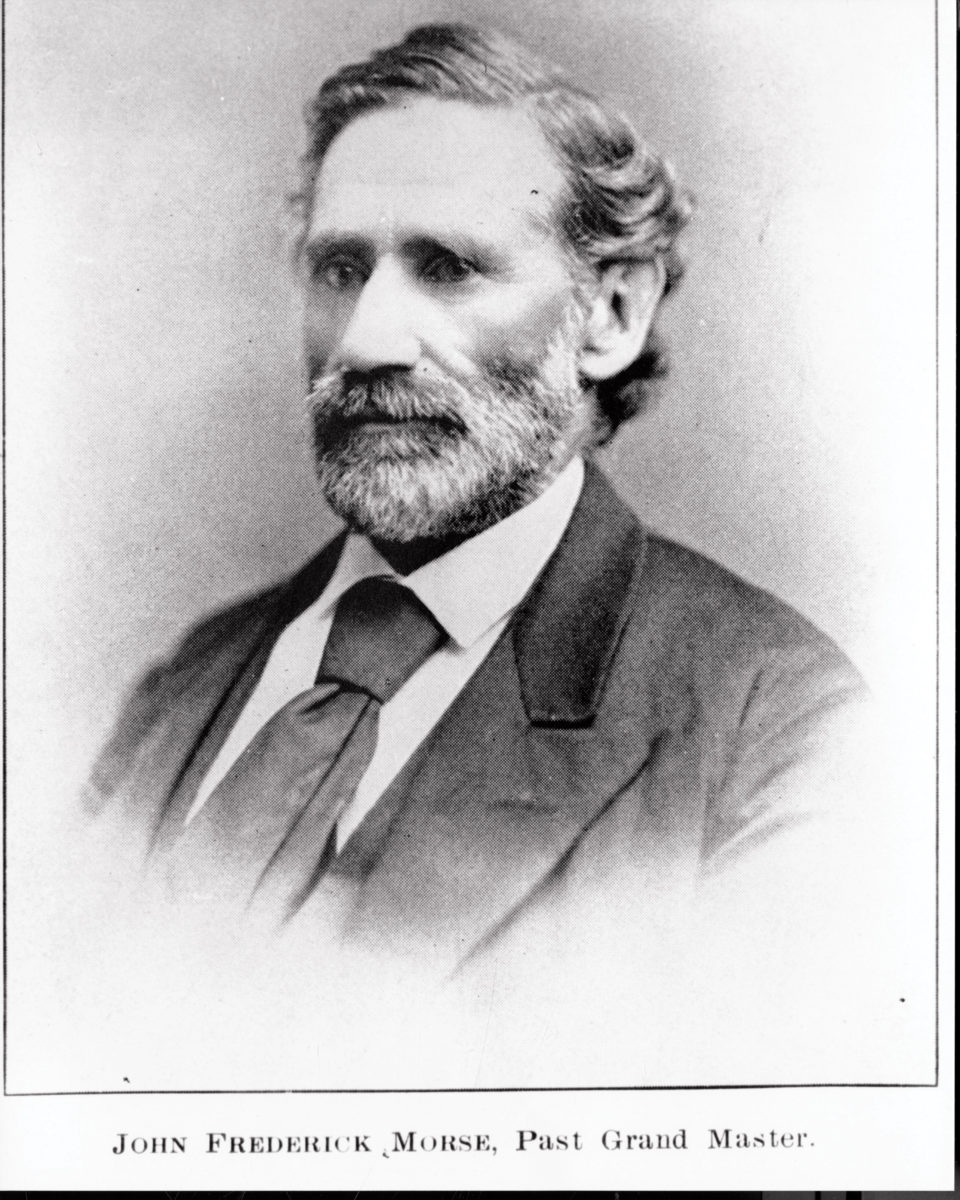 One of the first and most important changes to that arrangement came in December 1849, with the opening of the jointly run Odd Fellows’ and Masons’ Hospital in Fort Sutter—soon to become practically overrun with cholera patients. Built at a cost of $15,000, the hospital was run by General Albert Maver Winn. Winn was both a member of Tehama Masonic Lodge No. 3 and ranking officer of the Odd Fellows in California. Two physicians, John Frederick Morse and Jacob D.B. Stillman (both of Tehama No. 3), saw to the sick and distressed free of charge. Patients who died at the hospital had their information sent to their home lodges in other states—one of the only reliable methods of dispatching such information to relatives back home. Along with other local medical heroes like Dr. Volney Spaulding, Mayor James Hardenbergh, and Dr. Gregory Phelan, Morse and Stillman were largely responsible for remaking medical care in Sacramento.

The hospital was the primary symbol of Masonic relief in Sacramento during the outbreak, but it wasn’t the only source. In fact, the three pioneering lodges of the city (Tehama No. 3, Jennings No. 4, and Sutter No. 6) dispatched funds in 1850 to the indigent at a rate that’s almost unthinkable today—an effort to care for the sick, provide respectable burials for the dead, and aid the widowed that’s been described as nothing short of “heroic.” Together, the three lodges, although already in the red thanks to the construction of new lodge halls, took on a relief debt totaling more than $31,000 in direct funds and hospital costs during the outbreak. For context, the entire city of Sacramento had only 69 Masons that year, of about 300 statewide. Meaning that on average, each Sacramento Mason shouldered something like $449 in relief debt—equivalent to almost $15,000 per person in today’s dollars. That staggering commitment actually sunk Jennings Lodge No. 4, which disbanded in 1853.

Winn, as councilman and former mayor of Sacramento, president of the Masons and Odd Fellows Association, and leader of the Masonic relief movement, was perhaps first among equals with regards to charity, “exhausting the contents of his own purse and putting himself into severe financial straits in an heroic effort to relieve the suffering,” according to John Whitsell’s Hundred Years of Freemasonry in California. Four years after the outbreak, the Odd Fellows and Masons issued a joint report recommending that Winn be personally reimbursed for costs he incurred during the outbreak totaling $19,140. (Ultimately, the city of Sacramento issued him $1,825.) Several years later, Winn moved to San Francisco and founded the order of the Native Sons of the Golden West.

Winn wasn’t alone among Masonic champions of the outbreak. Dr. John F. Morse, as head of the Odd Fellows’ and Masons’ Hospital at Fort Sutter, was said to have tended to the dying by the hundreds during the outbreak and distinguished himself as one of early California’s most celebrated physicians. After the cholera outbreak, Morse—already the founding editor of the Sacramento Union newspaper, and credited as one of the town’s first historians—organized the first-ever Sacramento Medical Society, and later graduated to organizing the first California State Medical Society, serving as its first chairman. Additionally, he became the first medical officer of the state of California and served as editor of the California State Medical Journal. In 1872, having relocated to San Francisco, he was elected president of the San Francisco Medical Society.

Morse’s partner at the Masons’ hospital, Dr. Jacob Stillman, was also a renaissance man of sorts: He was a past president of the Sacramento Society of California Pioneers and a past Grand Master of the Odd Fellows, as well as a high-ranking member of the Royal Arch Masons, the Knights Templar, and the Knights of Malta. He later affiliated with Oriental Lodge in San Francisco, according to Whitsell.

Other Masons were also influential in combatting the plague: Dr. Berryman Bryant, of Keith Lodge No. 187 in Gilroy, in 1849 established a “home for the sick” on L Street in Sacramento, very likely the city’s first private hospital, which aided scores of choleric patients. John Bigler, originally of Connecticut Lodge No. 74 (among California’s first lodges, prior to formation of its Grand Lodge) and later of Tehama No. 3, was at the time of the outbreak speaker of the state assembly. He would go on to serve as the third governor of California, though in 1850, he too was described by Whitsell as working tirelessly, walking “among the sick and dying, serving wherever he could when the stench was so bad he had to keep a lump of camphor at his nose.”

And finally, there was Dr. John Townsend, a larger-than-life figure in early California history. Townsend had been among the first party to drive wagons cross the Sierra Nevada and became the first resident physician of San Francisco (where Townsend Street is named in his honor). At the time of the outbreak, Townsend was the first junior warden of San Jose Lodge No. 10, where he ministered to the sick right up until both he and his wife succumbed to the disease on December 8, 1850.

Though largely forgotten by history, the cholera outbreak of 1850 stands out in the history of California Masonry as a shining example of the fraternity’s commitment to fulfilling its obligation of relief. “We know beyond doubt that they stood true in hour of need,” wrote Whitsell in his Hundred Years of Freemasonry in California.

“They nursed and obtained medical care for the sick. They soothed the dying and wrote letters to the nearest of kin. They buried their dead in decent places with suitable honors and dignity… This is certain: no sick, destitute, and suffering brother has been permitted to suffer or die in their midst, uncared for,” Whitsell continued. “The noble generosity and disinterestedness with which a few Masons in one of our new cities have contributed so largely to the wants of the brethren coming upon them from all parts of the civilized world, has afforded a brilliant illustration to the world of the excellence and strength of our principles, and has been most effective in commending our order to the respect of those who are not of us.”