Brothers to the Rescue

DURING THE FIRST WORLD WAR, CALIFORNIA BROTHERS
BANDED TOGETHER TO SUPPORT THEIR COUNTRY

Below is the article from the June/July 2015 issue of California Freemason. Read the full issue here.

Although the United States was officially neutral during the early years of World War I, groups of young men eager to assist in the Allied effort were informally organized by American universities and sponsored by the American Red Cross. Patriotism at this time was infectious, and a number of Masons became interested in the idea of serving in the United States Army where brothers could stand together. 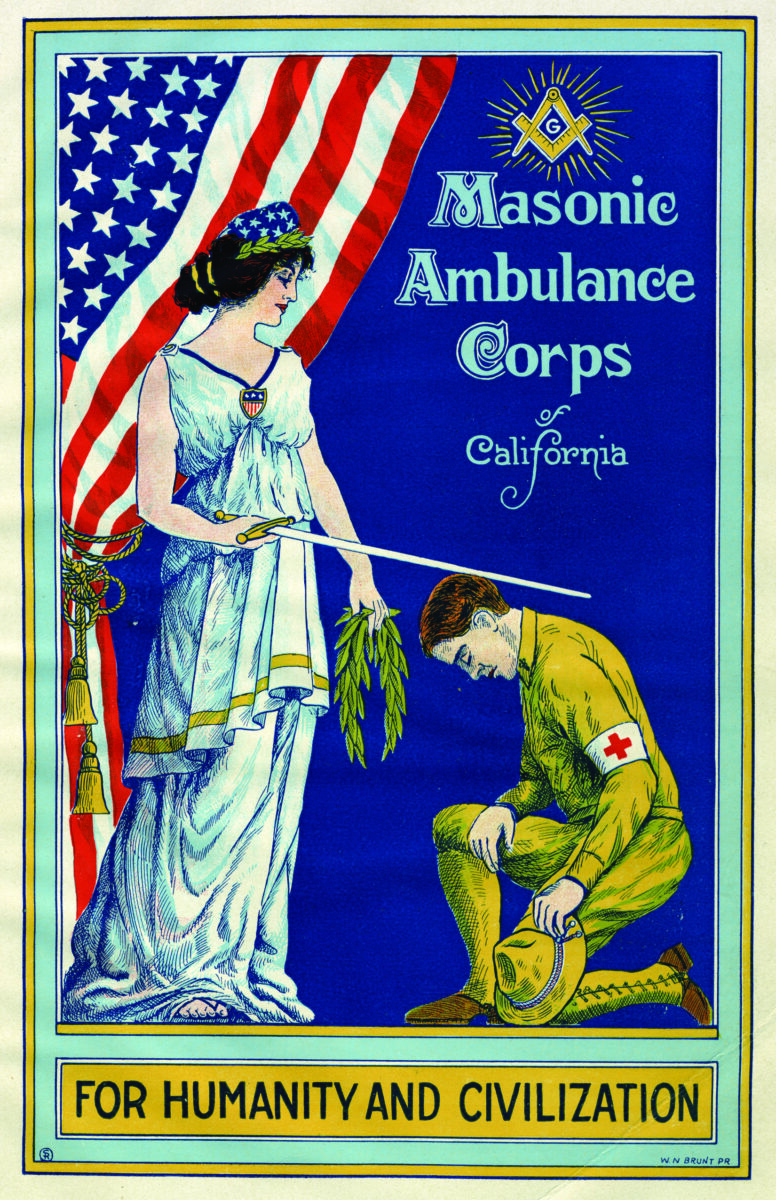 On May 12, 1917, at the Stewart Hotel in San Francisco, a Masonic committee determined that one way to achieve this goal was to form an Ambulance Corps that would allow brothers to enter the service together through the Red Cross. Financial resources were quickly mobilized with the assistance of the Masonic Club of San Francisco, which raised $15,000 for the National Red Cross Service. This same committee was also charged with providing rare comforts to the men who would go to war, including magazines and books. “Foster” mothers and fathers in the Masonic family assisted by “adopting” an individual member of the corps as a “foster son,” for whom they would provide welcome moral support in the form of mail and other gifts.

By late 1917, following the United States government’s declaration of war, these volunteer groups were forbidden and the committee’s plan was revised to supply the U.S. Army with a full complement of men and officers for one of its ambulance companies. On August 4, 1917, the “Masonic Ambulance Corps” took the official designation of the 364th Ambulance Co., 316th Sanitary Train, 91st Division, United States Army, and left San Francisco for training at Camp Lewis in Washington. Charles Cole, a member of the Corps, recalled,

The Masonic Ambulance Corps assembled in front of the San Francisco City Hall and the mayor of the city presented to the company a large American flag, which we carried in the parade along Market Street, accompanied by the Shrine Band. The flag was extra large and although Hereford, carrying it, was quite tall, the end still dragged on the ground, and I, acting as color guard, found it necessary to carry it over my arm. With the Shrine band playing ‘Onward Christian Soldiers,’ this was a thrilling day for us as we entrained for Camp Lewis.

Above:
1917 Postcard of the Masonic Ambulance Corps during roll call in Camp Lewis, WA

The company, one of four such units in the 316th Sanitary Train of the 91st Division, consisted of a captain, four lieutenants, 12 sergeants, 20 chauffeurs and 87 privates. Nearly every member was a California Master Mason, although there were a few men from other Masonic jurisdictions. Once at Camp Lewis, in addition to the usual training and duties, the men assisted with vaccinating incoming troops, as well as providing ambulance service throughout the encampment.

Following eight days of additional training at Camp Merritt in New Jersey, the Corps boarded the steamer “Olympic,” and sailed first to Southampton, England, and then to Cherbourg, France. By the end of August, the company was serving on the front lines and participating in the Meuse-Argonne Offensive and the Battle of the Lys during the final phase of the war.

The diary of Private William Nielsen offers a glimpse into the experiences of the Masonic Ambulance Corp members as they traversed a war-torn countryside in the last days of the war.

Friday, October 25, 1918: Struck tents about 8 o’clock; at 9 on our way. This time seeing Belgium on foot as we did in France. Our march took us across no-man’s land. Saw the graves of a million men. At Langemark we crossed what was the German front line. Many ruins. Nothing left of towns, tanks, etc… About dusk we arrived in Roulers …Salvage blankets at field hospital. Pass dead man in hall on stretcher.

Monday, November 11, 1918: Up at 5. Load of rations for 364th to Audenarde across river. All say war fini at 11. Bum lunch. Firing increasing as it nears the last few minutes – and then silence! Parked machine in old Hun hospital. Bed at 7 p.m.

[Note: In the last sentence in Nielson’s diary, above, the reference to one of the deceased soldier as a “traveler” implies that through some means, Nielson was able to identify this man as a Mason.]

With the November 11 armistice holding, the 364th Ambulance Company left France on April 7, 1919 aboard the steamer “Virginian” and arrived in New York on April 20. On May 2, the members of the company left for their respective demobilization centers, and those destined for the San Francisco Presidio arrived there on May 9. Four days later, they were discharged from the U.S. Army.

Visit the online archives of the Henry Wilson Coil Library and Museum of Freemasonry to view original artifacts from the Masonic Ambulance Corps.